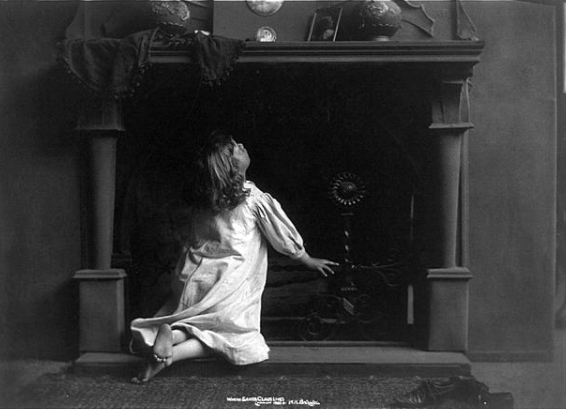 In the years following the Civil War, Southerners--both black and white--would look back at the old plantation Christmases with overwhelming nostalgia. Based on a collection of slave narratives the government collected as part of the Federal Writer’s Project in the late 1930s, we know that Christmas was observed on nearly all such plantations, with black slaves and white slave owners often celebrating together. For the slaves, the old Christmases stood out as bright spots from their pasts, as occasions when they didn’t have to work. Instead, they received small gifts from their masters, were often reunited with their families, and granted the permission to eat, drink and be merry. As former slave Charley Hurt said, “Dat was one day on Massa’s place when all am happy and forgets dey am slaves.”

For some slave owners, the holiday celebration was used to reinforce paternalism, encourage slave allegiance, and provide what Frederick Douglass described as a “safety valve to carry off the rebellious spirit of enslaved humanity.” Despite this, slaves found a way to make this time significant by strengthening communal bonds, reuniting families, and rejuvenating their bodies and spirits. Christmas was also a way for slaves to create their own traditions. In parts of the coastal South, many slaves engaged in festivities with roots from their West African heritage in a celebration called “John Kunering.” An excerpt from The Southern Christmas Book; the full story from earliest times to present: people, customs, conviviality, carols, cooking (1958) by Harnett T. Kane describes this tradition: 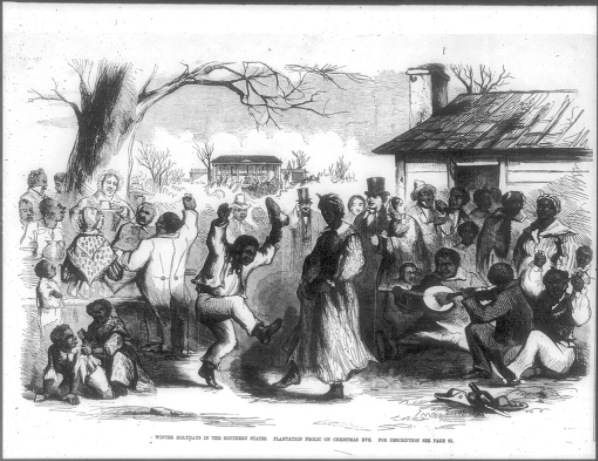 Winter Holydays in the Southern States – Plantation Frolic on Christmas Eve,” from Frank Leslie’s Illustrated Newspaper, Dec. 26, 1857. The slaveholders and their family can be seen in the background, watching the dancers and distributing gifts. LOC

Nowhere have I been able to find a parallel to the “John Canoeing” or “John Kunering” of several Carolina settlements.

For days before Christmas in such towns as Wilmington, major port of the area, Negroes whispered their plans for “John Kuner,” a ceremony whose followers were supposed to keep their identities well-hidden. White children, remembering the event from previous years, talked of it no less.

On Christmas morning there arose a distant sound of rhythmic chanting, accompanied by instrumental music. A procession appeared down the street, its members crying out as they went, and the children of the town ran to their porches or to the street, to view the line of blacks with strips of bright-colored cloth attached to their clothes, or any one of a dozen kinds of grotesque garb. Each had a “Kuner face,” a mask with a great nose and beard. Many wore horns, and all moved in a wild, fantastic style.

Dougald MacMillan, whose description of the event is most authoritative, explained that even though the masqueraders were all men, a few wore women’s clothes, and their high-voiced screeching added to the merriment. A leader, always an especially horrendous figure, carried a rawhide whip which he snapped back and forth, to keep the bolder youths at a distance. As the procession moved on, its members sang the traditional chant:

On and on the singers went, the rhythmic instruments pounding, the voices rising and falling. Now and then the songs varied, with a soloist followed by a chorus.

(Chorus): My true love down the lane!

(Soloist): We on the grass where the dew been poured!

With their streamers and tatters whirling around them, the Kuners stopped at the houses of the white people, or before groups they met on the street, and sang and danced for them. One of the party held out a hat to collect money, and then the band strolled on its way.

As [Wilmington historian] Louis T. Moore declared, “Some of the younger ones were somewhat frightened at the sight, but it did not take them long to learn that they had nothing to fear from the Kuners, and from then on this particular feature of Christmas was looked forward to with as much eagerness as was the arrival of Santa Claus himself.” 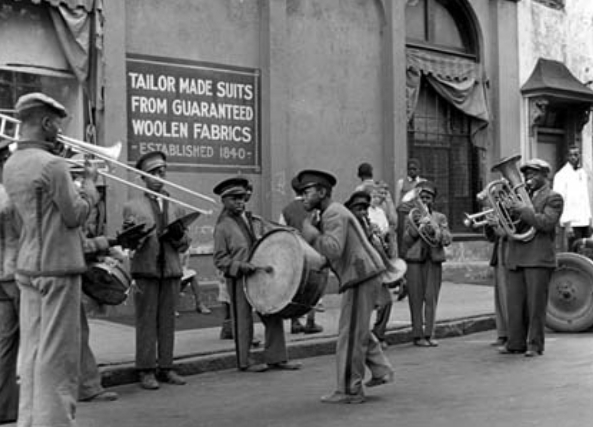 Traced back to a “zesty” character named John Connu, who lived on the coast in Guinea in the 1700s, this ritual has the same roots as New Orleans “second line” parades and is a precursor to the modern-day performances of black marching bands and the step routines of black fraternities and sororities. Notably, the Jenkins Orphanage Orchestra was an early example of this type of jazz band, from downtown Charleston’s Harleston Village at the turn of the last century.

Even today, we primarily see slaves depicted in their conflicts with their owners and rarely do we see the culture and lives they made for themselves despite oppression. Reflecting on slaves’ traditions at this time of year is a way for us to honor their strength and ingenuity, despite their circumstances. From their example, we see the truest illustration of the Christmas spirit. May it be alive and well with you as you gather, make merry, and revivify your familial and social bonds this holiday season.