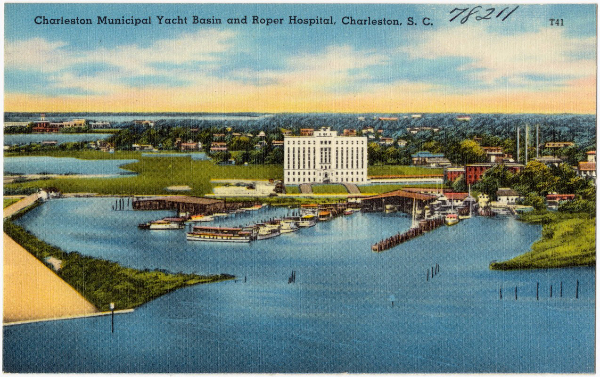 Last week, in honor of National Hospital Week, we took a look at Charleston’s historic hospitals and medical facilities and got as far as the 1886 earthquake. (Of course, there are medical facilities other than Roper and the Medical University, but for the sake of brevity, we’ll just stick to those for now!) On the day after the earthquake, the patients from both Roper and City Hospitals were moved to the temporary facility at Agricultural Hall (where the Gibbes Museum of Art stands today). The earthquake provided Mayor William Ashmead Courtenay the opportunity to rebuild the City Hospital, and the site chosen for the new facility was on reclaimed marshland along the (then) banks of the Ashley River.

Construction of the new City Hospital began six months after the earthquake, funded by earthquake relief money, on the corner of Lucas (now Jonathan Lucas) and Calhoun streets; when it opened in May 1888 it became known as Memorial Hospital. Its construction required the demolition of part of the multi-acre Lucas garden, which was part of a large lot that included the still-standing Jonathan Lucas, Jr. house, mill ponds, and the Lucas rice and lumber mills. In 1893, the former Lucas (and then Jennings) residence (ca. 1805) was made a part of the Memorial Hospital operations as the Riverside Infirmary. 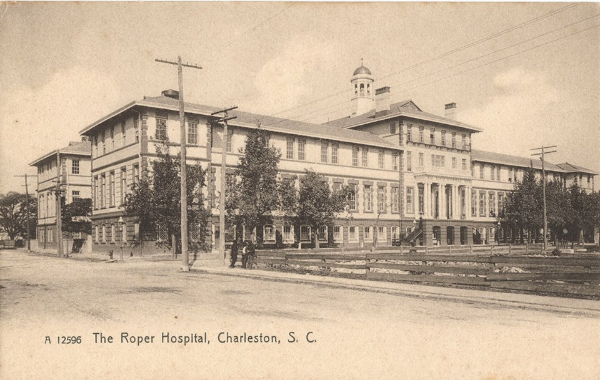 After extensive renovations, Memorial Hospital was replaced by the New Roper Hospital in 1904. In 1910, the Jonathan Lucas House became part of the R.A. Kinloch Home for Nurses. The house is still owned by the Medical Society of South Carolina. In 1921, the Thompson Memorial Annex was built to house the Riverside Infirmary. 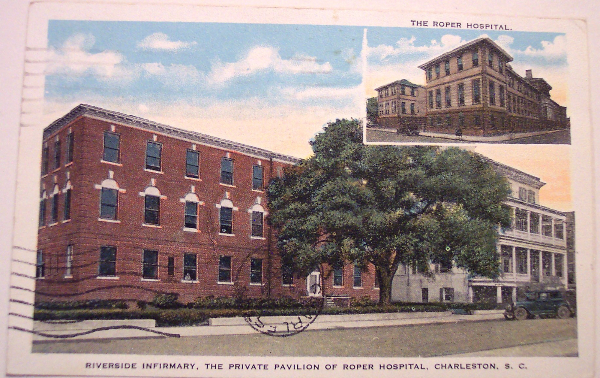 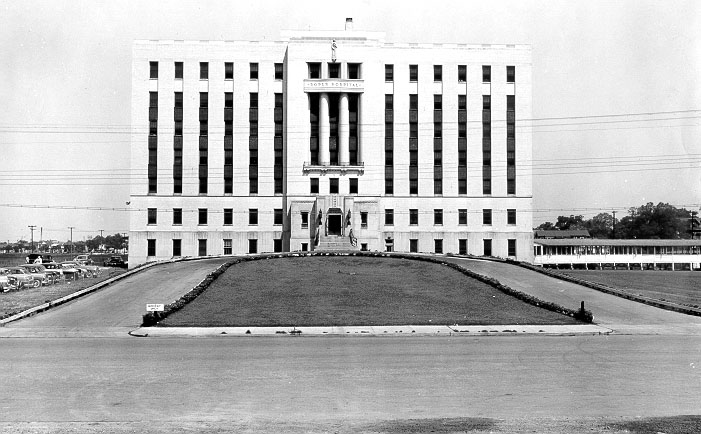 A third Roper Hospital was constructed and completed by 1945 a bit further down Calhoun Street. It was built with federal assistance designed to expand local hospital facilities during World War II. This expansion of the Roper complex was for many years commonly referred to as the Private Pavilion or New Roper. This was to distinguish it from what was generally known as Old Roper, Charleston’s public and teaching hospital. The third Roper was constructed over a filled-in mill pond, and was across the street from the city yacht basin (see postcard at top). A covered walkway connected the two facilities until modern wings were added to the New Roper in its 1962 expansion program, and the Old Roper at the corner of Calhoun and Barre was demolished in 1963. By this time, Roper had become a private hospital. 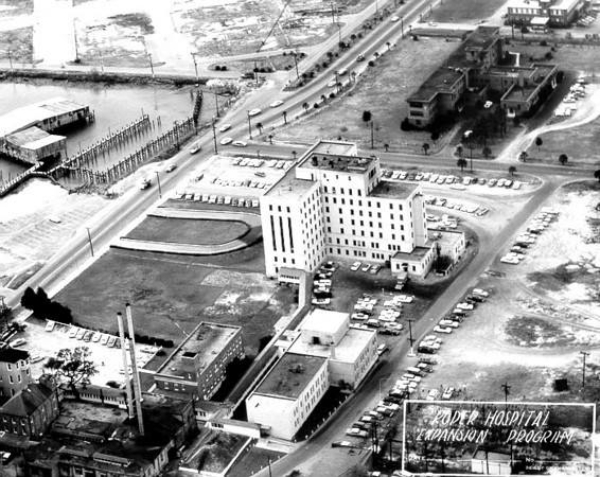 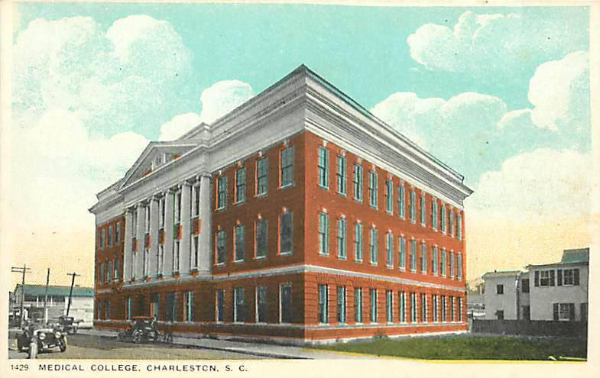 In 1913, the Medical College of the State of South Carolina officially became a state institution. According to The Medical University of South Carolina, by Susan Dick Hoffius, as part of the deal to transfer the Medical College to state management, the local population had to raise money to construct a new building to replace the old college on Queen Street. The City donated land that was also part of the original Lucas property, and the first new building was constructed in 1914 near the corner of Calhoun and Lucas (now Jonathan Lucas) streets. In the first half of the century, additional buildings were erected and formed what became known as the Quadrangle: the Medical College Building (above, 1914), the laboratory-clinic building, the library-pathology building (1930), physiology-pharmacology building (1920), the Baruch Auditorium (1940), and the research building (1962). The library-pathology building was turned into offices when the new library was built in 1971; it was razed in 1982 to make way for the Hollings Cancer Center. 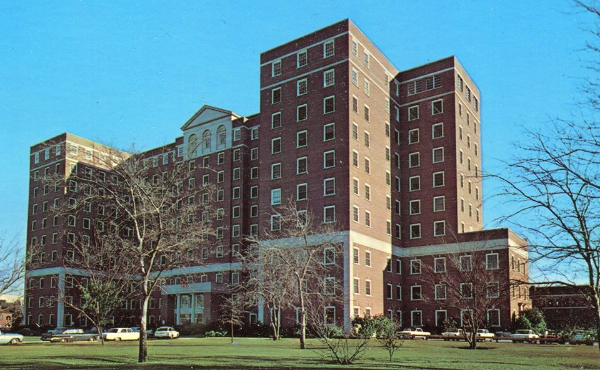 The Medical College constructed its own hospital with federal funding and opened in 1955. The original building has been renovated and added onto a number of times, including the 1975 addition of the Clinical Sciences building on the west side and the Storm Eye Institute on the east side (and then the Children’s Hospital in 1987). Perhaps the most striking change is the 1993 addition of the North Tower to the front of the building, facing the horseshoe. Now the Medical University of South Carolina (MUSC), the footprint of the school and its hospital facilities continues to spread. Surely you’ve heard about the new $350 million children’s hospital, as well as the collaborative effort to build a work-live-play community north of the campus called WestEdge (formerly known as the Horizon Project)? 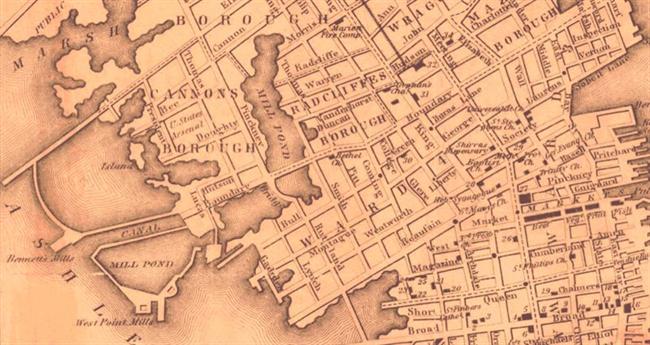 The area around the current site of Charleston’s medical complex was primarily comprised of rice and lumber mills and mill ponds until the late 1800s and early 1900s. Some of the older homes in this area were built on high ground by wealthy millers, such as Jonathan Lucas, Jr. (see above) and Governor Thomas Bennett, Jr. whose 1825 home at 69 Barre Street has one of only two cantilevered staircases in Charleston (the other is in the Nathaniel Russell House). Most of the mills operating in Charleston in 1860 were owned and operated by the Lucas and Bennett families, who were related by marriage. The Halsey Lumber Company was a lumber manufacturer located at Lucas and Calhoun streets that used the Bennett Mill pond for its sawmills for many years. Alfred O. Halsey (yes, of the Halsey Map at the Preservation Society of Charleston fame) was president and treasurer. The Halsey family acquired the Bennett Mill property in the late 19th century and as they filled in the mill pond in the 1880s and 1890s, new lots were created for the construction of dwellings. Included in this round of construction is one of our favorite spots in Harleston Village, Halsey Street. Lois had a great time assisting some clients purchase a home on this street several years ago, and Ginger’s kept the house rented for Cliff and Vicki Roberts until they could move here permanently.

Cliff and Vicki have always dreamed of living in Charleston as they both have South Carolina roots. Cliff’s maternal great grandparents immigrated to Charleston from Ireland before the Civil War; Vicki’s mother grew up in Columbia and much of her extended family still lives in the Palmetto State. In 1985, Cliff kept alive a family tradition by asking for Vicki’s hand in marriage in the garden of the Battery Carriage House Inn. Fast-forward 30 years, they knew they wanted to get out of Atlanta after their kids graduated from college, and Charleston made perfect sense: Cliff’s a huge history buff (you can see him as a Confederate re-enactor in the upcoming movie “A Walk across America” with Robert Redford and Nick Nolte) and Vicki wanted a walkable city that offered the option to walk to the “4 corners of my life” – the restaurant, the church, the library and the gym. Sounds like Charleston!

So, four years ago they met with Lois to explore their options. The first house Lois showed them was 10 Halsey Street and it was everything they wanted. Though they looked at other properties, none compared; the clincher was the folder on the dining room table with newspaper articles about all the interesting people who lived on the street: this was definitely a community in which they could imagine living. They bought the home the same day and since they weren’t ready yet to move, Ginger’s managed the property for them as a rental. As Vicki says, “I feel like we’ve won the lottery on the tenants. We’ve had two great families rent the home, families I’d love to live next door to.”

The Roberts were here a couple of weeks ago and will be moving to Charleston at the end of the summer. As Vicki said, “ I could not be more excited about the move – and fulfilling our dream to ‘Love Where You Live.’ A few neighbors stopped by and we immediately felt the famous Charleston hospitality. Cliff and I are both so excited to really live our dream as we move to Charleston. And we are so appreciative of all the support Lois Lane Properties has provided us. We look forward to our next chapter in life in the Holy City.”

If you run into Cliff and Vicki, y’all be sure to say hey!