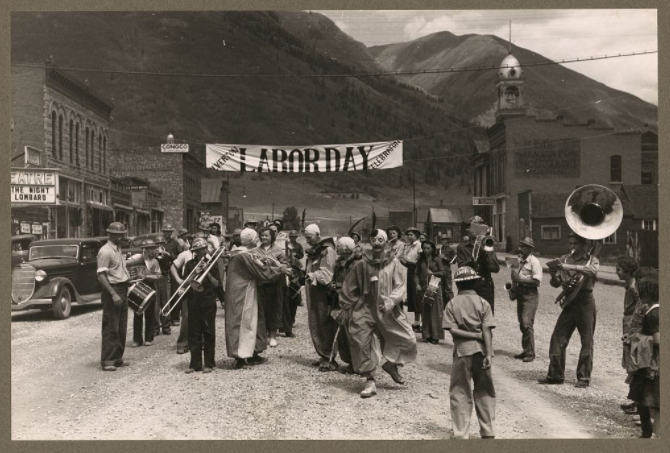 Labor Day. Time to stow away the white patent leathers and searsucker suits, at least according to The Rules that we follow here in the South. Of course, since Labor Day represents a lot more than a wardrobe schedule checkpoint, we just had to check out some of the history behind it. So what do you know about the workingman's holiday?

The Industrial Revolution sets the Stage

The origins of Labor Day go back to the end of the 19th century. The Industrial Revolution had replaced agriculture with manufacturing around most of the country (although, not so much in the South at this point). Factory workers were granted steady employment, but all too often by compromising fair pay and acceptable working conditions. At the height of the Industrial Revolution in the 1880s, the average American worked twelve hour days, seven days a week to barely make ends meet. When complaints were lodged, they fell mostly on deaf ears. Children, immigrants, and other especially vulnerable groups worked for next to nothing in factories, mills, and mines where conditions were dangerous and dismal. Across the country, worker’s unions became more and more common as laborers tried to gain leverage in a fight for their voice to be heard. They rallied and went on strikes, most not ending peacefully.

The first Labor Day ‘parade’ was held on September 5, 1882 as 10,000 workers marched from City Hall to Union Square in a rally for an eight hour work day. Two years later, the Central Labor Union declared the first Monday in September as the ‘Working Man’s Holiday.’ Oregon was the first state to officially recognize the holiday, but it took another ten years and a political disaster for Labor Day to be recognized by the federal government. 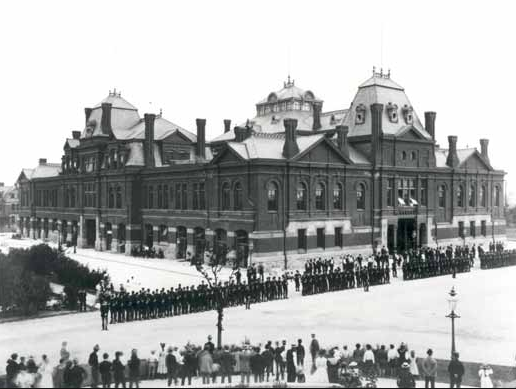 Pullman strikers outside Arcade Building in Pullman, Chicago. The Illinois National Guard can be seen guarding the building during thge Pullman Railroad Strike in 1894. via WikiCommons

In 1880, George Pullman bought 4,000 acres just south of Chicago and built the first planned company town to accompany his new railroad car factory. The 1,300-structure community was designed to provide everything his workers would need to be content--housing, shops, schools, churches, theaters, libraries--and keep them away from the vice and unrest of the big city. While he was praised by outsiders for his benevolence and forward-thinking, his workers felt at times trapped by Pullman’s paternalistic control: “We are born in a Pullman house, fed from the Pullman shops, taught in the Pullman school, catechized in the Pullman Church, and when we die we shall go to the Pullman Hell.”

In 1894, Pullman’s business dropped, so he cut jobs, hours, and wages--but not the cost of rent or goods. Workers in Pullman’s Palace Car Company went on strike; six weeks later a full boycott was declared by the American Railroad Union and a violent upheaval followed. President Grover Cleveland sent in federal troops in an unsuccessful bid to break the strike, resulting in riots that killed or maimed dozens of workers. In an effort to repair ties with the American worker and to conciliate organized labor, President Cleveland and Congress designated Labor Day as a federal holiday six days after the strike ended. Pullman himself died three years later. 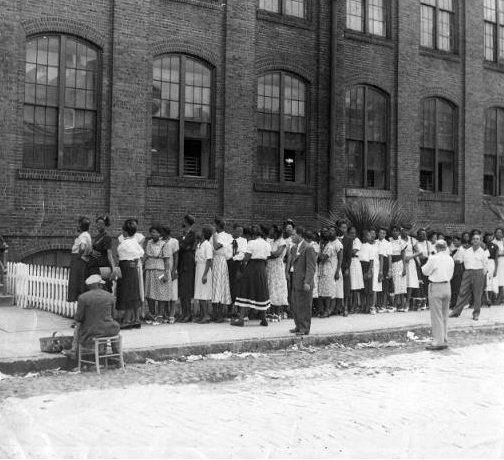 Strikers outside of the Cigar Factory in Charleston, SC, ca 1945. From Lowcountry History Digital Initiative.

On October 22, 1945 over 1,200 workers at Charleston's Cigar Factory on East Bay Street went on strike against the American Tobacco Company. Most of the strikers were black women (who made up the majority of the factory's workforce) but there were also white women and men of both races involved. It was a remarkable time in history, when typically segregated groups came together in solidarity to fight for the rights of all workers. The strike lasted five months, and while many of the strikers' demands were not met, it was nonetheless considered a modest success.

Now here's something you might not know about: A long-time Cigar Factory worker named Lucille Simmons changed the words of the old spiritual "I Will Overcome One Day" to "We Will Overcome" and used it to signal the end of the day for the picketing strikers. A couple of years later at an activist workshop in Tennessee, the song was spread. Eventually it was recorded by Pete Seeger as "We Shall Overcome" and became the anthem of the Civil Rights movement across the country. Way to go, Ms. Simmons! 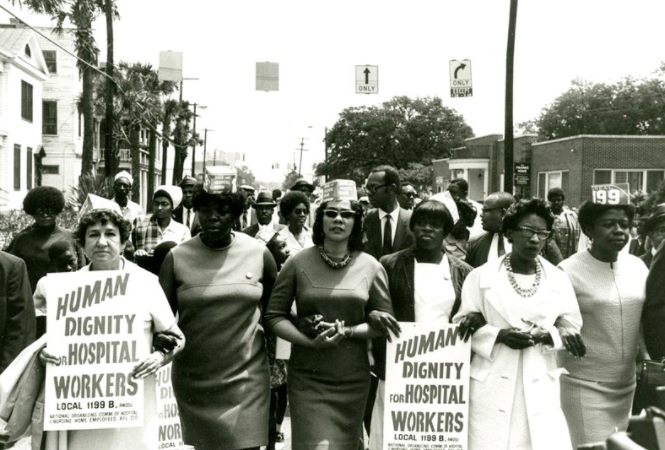 Despite the united front displayed by Cigar Factory workers, by the 1960s labor disputes were closely aligned with civil rights violations. In Charleston, early efforts in addressing civil rights by desegregating schools and businesses had not been extended to workers by the end of the decade. Hospital workers at the Medical College and County hospitals began organizing over a year before they formally asked for anti-discrimination measures, fair grievances policies, and union recognition.

The Medical College's president refused to hear their grievances, so on March 19, 1969 the Charleston Hospital Workers Strike began. State and county officials were determined to not to recognize a workers union at any cost. While Mayor J. Palmer Gaillard and some hospital officials were willing to begin a dialogue with the strikers, Governor McNair refused to let that happen. On April 25, he ordered over a thousand state troopers and National Guardsmen to Charleston. A state of emergency was declared and a curfew imposed. There were protests and demonstrations and hundreds of arrests. As summer approached, things got heated up.

Coretta Scott King came and spoke, lamenting the $1.30/hr wage that black nurses were making. There was a parade on Mother's Day in which 10,000 people (including five US Congressmen) marched from the City Hall Auditorium on upper King Street to the Medical College on Ashley. There was a boycott on King Street businesses, and demonstrations marched through the City Market, which was beginning its tourism season. Things were getting crazy, and the pressure was on--for everyone--to find a resolution.

On June 27, 1969 the Medical College president announced that an agreement had been reached. The strikers were hired back with a modest pay increase and a new plan for hearing grievances was put into place; the strikers conceded on the union recognition. Organizers declared it a victory for 25,000 hospital workers--black and white--across the state. Perhaps the greatest legacy of this three-month strike is that state and local leaders were awakened to the voice of the everyday worker. And that's exactly who Labor Day was created to celebrate.